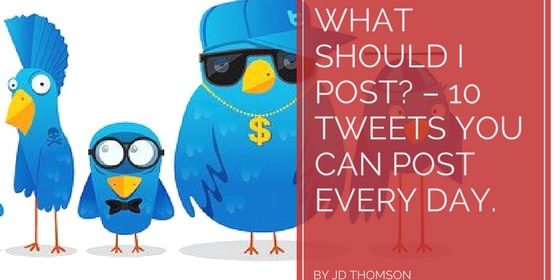 Twitter allows users to have a direct conversation style. This style can mean you can easily join in on existing conversations that are happening on the platform. But some people tend not to get it and are more likely to be on Facebook.

In the last couple of years, a lot of the same people have been saying that Twitter isn’t doing well, and Twitter is dead Well; Twitter isn’t dead. In fact, Twitter is still a great platform to have a conversation, and they are continuing to make the platform better with each update.

A lot of people think Twitter is about followers, but it’s not it’s about meeting people, talking to people and building relationships. If you want to these things, you have to take an active role on the platform.

Not just send out a tweet once in a blue moon.

So Let me show you what you can do to help get you started on Twitter.

Easy Just say hello. Greet the community. Give a shout out to someone your meeting that day or an inside look into what you are doing this morning.

Reply to the people who are talking to you. Don’t ignore them.

You can always retweet (AKA Share) which you should, but if you add a comment to the retweet, it can make it even better.

It could be someone who put a Tweet out in the world, and you think you can add your option too. By joining in, you are meeting new people and will, in turn, increase your following.

5.  Ask a question in a @reply to someone who knows more.

You might not want to do this to a celebrity because they’re probably will not respond, but this is an excellent strategy to get to know a someone or even a thought leader. If you have read their content, ask a question about it. This approach is a great way to show that you’re paying attention and not a spammer.

6.  Participate in a trending topic or hashtag

This tip is an excellent way to get in front of an audience or gain a new one. But this will only work if you are offering something of valuable and relevant to say. Don’t just be a troll (being a D**k); you should try to contribute.

7.  Reply to someone else’s question

This is a neat little trick that I use to find questions, go to the search bar and put a “?” and click on the latest. If there is a question being asked to someone I already follow, I can answer it, if I can.

Create a Tweet and announce that you are celebrating someone else’s accomplishment. It’s a surprise for that person when they see that you’ve given them a shout out.

Checking out for the day

I like to let Twitter know that I’m signing off in the evening. But, no fear, they know I’ll be back saying “Hello” in the morning.

Those are the 10 Tweets you should be sending out most days. By Just sending out a few Tweets a day, you will start to build your Twitter audience as you go and create the content you want to publish.

If you have any Tweet ideas, leave those in the comments below